iqtriviaPosted on November 16, 2017 Posted in Uncategorized

The whole point of attending a trivia night is to have a good time arguing with your friends and trying to wrap your minds around interesting questions for a couple of hours.

But there are prizes (and more importantly, bragging rights) to be won, and there are a few things you can do to improve your chances of coming out ahead of everyone else.

1) Listen to the damn question

If we asked for five countries beginning with the letter T, don’t stop at four.

2) LISTEN TO THE DAMN QUESTION!

We pretty much never say anything for no reason. Often after reading the question itself there will be the odd hint thrown in, and if you stop listening your going to miss it.

If we phrase something a certain and unusual way, there’s a pretty good chance that’s not an accident. So listen to the whole question and you may get a push in the right direction.

3) Answer the question we asked

This is closely related to the above two points. There have been many times after hearing the answer that players have said “oh, I thought you meant the largest states” when we asked about the largest state capitals.

If you’re not sure what we asked, you can always ask us to repeat the question (though we may get cranky if we have to repeat it a dozen time because people just aren’t paying attention.) When asked what we mean, we will generally just repeat the question word for word. Recently when we asked for the animals that kill the most human beings, there were a lot of teams who just assumed humans didn’t count, even though we said anything from the animal kingdom was included.

Also, some of our questions may not be how they first appear. We’re never trying to trick you, but we have no qualms about letting you trick yourself.

There have been a lot of teams come through iQ Trivia where everyone on the team knows everything there is to know about rugby league or Madonna songs, or Disney films, but you can’t count on every question being on a subject you know everything about. If your team lacks diversity, you’re going to have a much tougher time.

Bringing along your neighbour who knows about American Presidents, your mum who is an expert on hits from the 70s, and your cousin who has memorised every element on the periodic table is a much better approach.

That said, there is also no need to overcrowd your team. With every new player you add, there is a law of diminishing returns. In general, if you don’t know something with 6 people on your team, you won’t know it with 20 people on your team. Past a certain point new additions are not adding more brain power, but more people to argue with. In general, if you’re whole office turns up, you’ll get a better result by splitting into a number of smaller teams rather than one enormous team (and you can talk smack at your colleagues.)

You’ll find things a lot easier if you turn up in advance of the quiz so you can get a good spot, and aren’t crammed into a small corner and struggling to catch up after missing the first couple of questions.

You should also be sure to sign up to the mailing list of whatever show you want to attend. (You can contact homework@iqtrivia.com.au with the venue in the subject line if you want to get the weekly e-mail.) Our homework question is something easy to find, totally unambiguous, but something you’re unlikely to know without looking it up, and given that it’s worth multiple points, it’s tough to win without getting it right.

Also, a number of the Facebook pages of our individual shows will post hints of varying levels of helpfulness prior to the show, and that can mean an extra point here or there if you follow us on social media and pay attention.

Finally, bringing a bit of scrap paper along will allow you to keep track of what’s happening on the quiz and enable you to work out the answers to things you don’t know right away. Which leads us to…

You may not be able to write the whole question on the answer sheet, so jot it down on a separate piece of paper and you can come back to it later without cluttering up your answers.

7) Don’t let your brain shut down

We ask a lot of questions that we don’t expect you to know right away. We will often ask questions that sound impossibly specific or obscure, but there is an interesting hook to them.

Think your way through the questions. The goal of iQ Trivia is not to have you regurgitate memorised facts, but to figure out things you don’t know. There will be many times where we ask a question we don’t expect ANYONE to actually know, but we’re never going to ask something impossibly obscure for no reason.

iQ Trivia isn’t about finding out what you know, but what you can figure out by debating with your friends and colleagues. So if your first instinct when you hear a question you don’t immediately know the answer to is to throw up your hands and say it’s impossible, you are not only unlikely to win at trivia, you are going to miss the fun of arguing with your teammates.

8) Go with your first instincts

Unless you have a good reason, go with the first answer that came into your head.

You may rethink things from time to time. If you realise the question is not what it first appeared to be, you probably should rethink things. But we’ve seen teams talk themselves out of the right answer more times that we can count.

9) We do frequently give points for particularly interesting wrong answers

If you don’t know the answer and can’t figure it out, never put “?” or leave it blank.

Teams have gotten interesting wrong answer points by listing half a dozen films someone has been in when they couldn’t remember the name of the actor. They’ve written half of the lyrics to a song or mentioned the ad campaigns that have used it when they couldn’t remember the title. One team has even answered a picture question about Anthony Hopkins in The Silence of the Lambs as being “that guy in that thing”, which got a point both because it’s technically not wrong, and it took guts. (Of course, we’re more likely to be generous with bonus points if you’re struggling.)

Apart from trivia, it’s good advice for life too.

We’re here to have a good time. Not knowing the capital of Uruguay isn’t a searing indictment of your worth as a human being. If you don’t know it, do the best you can and hope for the best. Freaking out is not going to help you find the answer, and cheating is going to mean you may run afoul of our cheating policy, and will guarantee that you come away with nothing.

So if you put these suggestions to use, you may find yourself looking as thrilled as these guys. 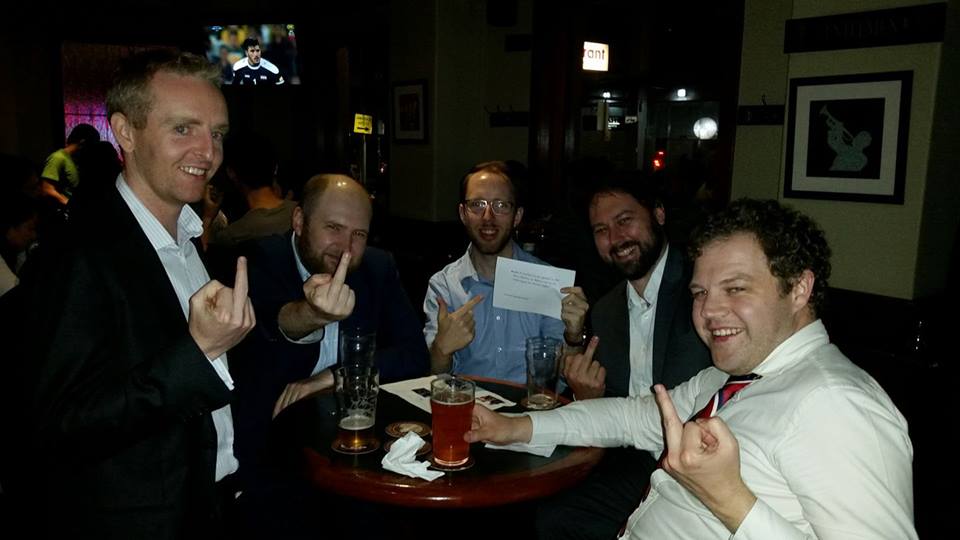