iqtriviaPosted on August 11, 2014 Posted in Uncategorized

Originally from California, Joe slept through high school, and later served in the Marines to get a University degree.  But after years of guarding embassies all around the world, he thought he would rather live in a country where the wildlife is constantly trying to kill you, and settled in Canberra, even going so far as marrying a local.

Now Sergeant Joe hosts iQ Trivia while planning his next career move as a TIE Fighter Pilot for the Galactic Empire.

Joe hosts a regular show every Tuesday at 7:30pm at the Belconnen Raiders Club in Holt. 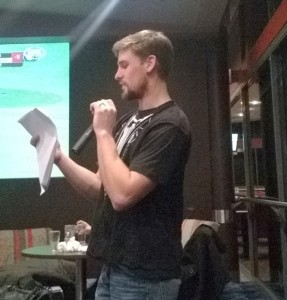